Patent Filing Statistics in the Food & Beverage Sector in Vietnam

Vietnamese cuisine has a growing reputation internationally, and a visit to Vietnam will quickly reveal that food plays a very important role in the country’s identity and culture, as well as its economy. More than 80% of the population makes a living through some form of agriculture, and approximately 35% of household income in Vietnam is spent on food and beverages. As food is the most essential of necessities, and thus the first priority in household spending, this percentage tends to be high in developing countries, declining as incomes rise. In Vietnam, however, even as the country has ascended from one of the poorest in the world to middle-income status, the percentage of income spent on food has remained high—an indication that Vietnamese people don’t just eat to live, they live to eat.

With a population approaching 100 million, Vietnam represents an appetizing market for investors in the food and beverage (F&B) sector. According to an October 2019 assessment from market research firm Vietnam Report, the F&B sector has the highest gross output and the second highest total revenue of all economic sectors in the country, and is expected to maintain its momentum with an average annual growth rate of more than 10% in the coming years, due to rising disposable income and shifting consumer tastes.

In this promising but also competitive market, many foreign and domestic F&B companies are directing investment into research and development activities, and protecting their new products through patents and other methods.

What are the special features of patent protection in this sector? We take a look at some patent filing statistics in F&B below 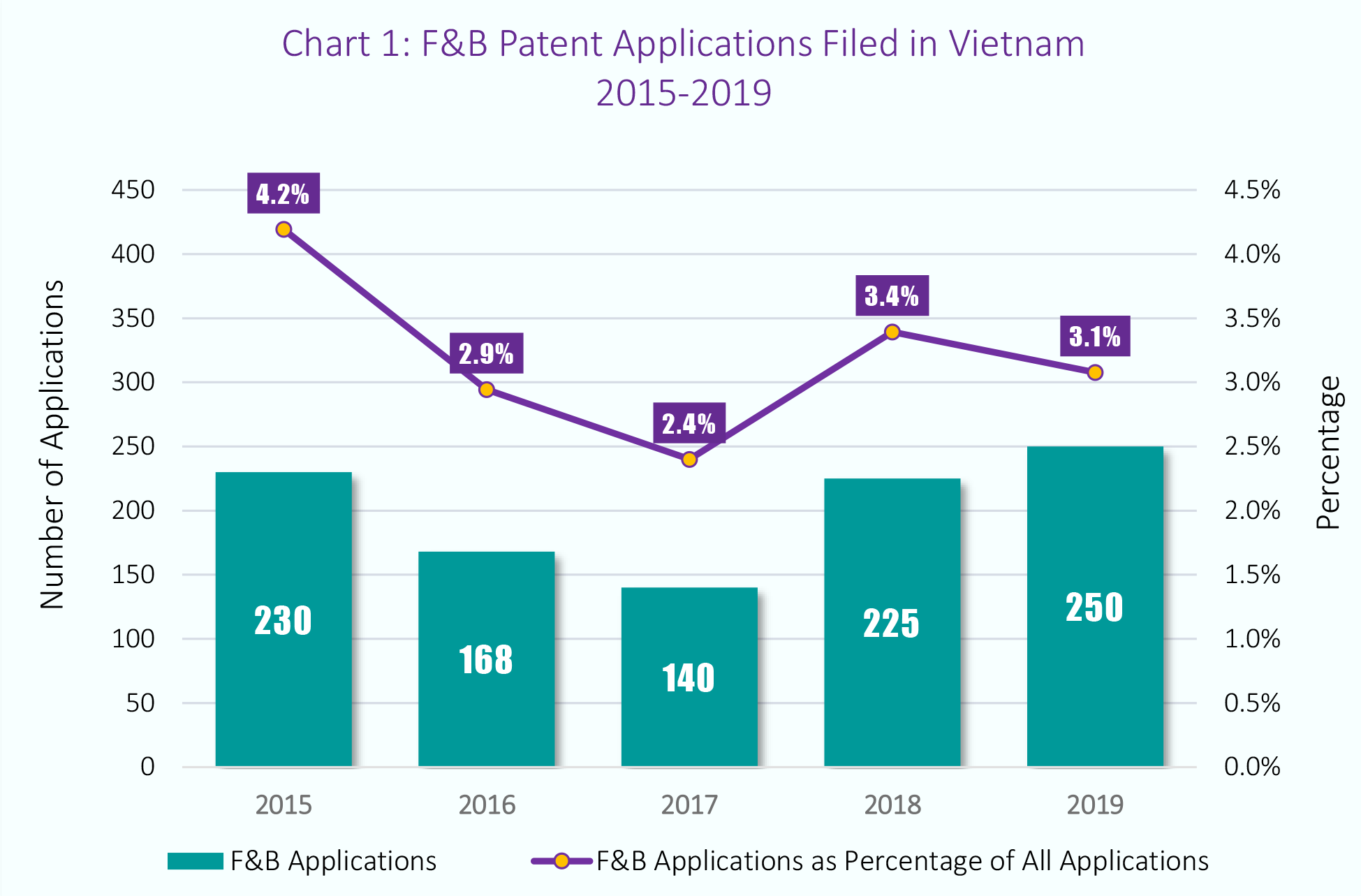 Our research indicates that in the past five years, patent applications in the F&B sector have accounted for around 3% of all applications filed in Vietnam. Meanwhile, based on WIPO’s statistics, the “food chemistry” classification (roughly comparable to the selection criteria we used for Vietnam) consistently accounts for only 0.9% of total PCT applications. Accordingly, the proportion of F&B applications in Vietnam is relatively large compared to the rest of the world, reflecting the importance of the industry to the country’s producers and consumers. 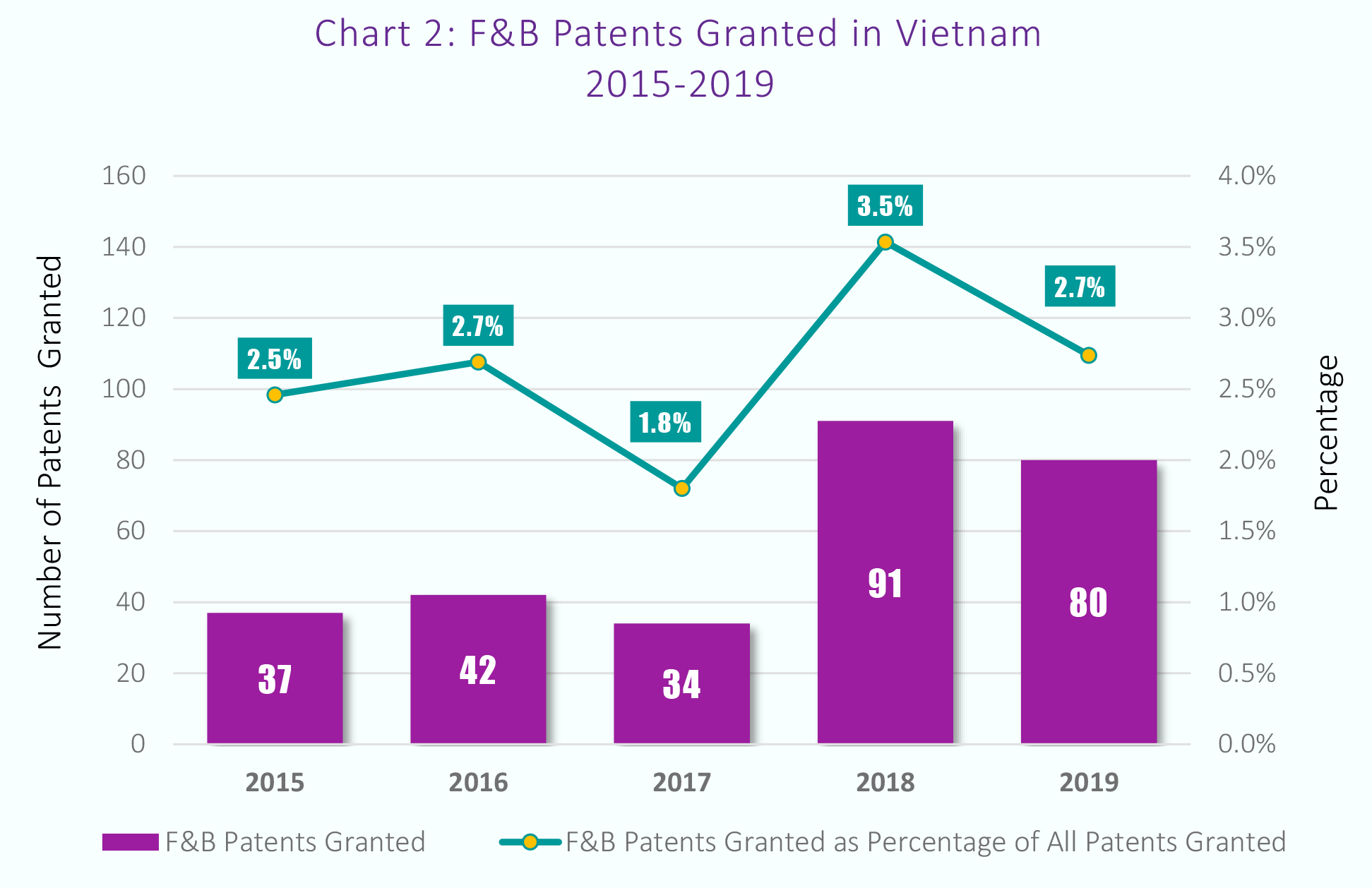 In 2018 and 2019, the number of F&B patents granted showed a remarkable increase compared to previous years. A similar increase can be seen in other industry sectors. This is the result of a concerted effort by the patent office, beginning in 2018, to shorten prosecution time and improve efficiency in patent examination, thereby reducing the backlog of pending applications.

While the abrupt change from 2017 to 2018 in F&B patents as a percentage of all patents granted is not easily explained, one contributing reason may be that F&B applications tend to be less complicated than those for areas like semiconductors and pharmaceuticals; as such, they might have represented “lowhanging fruit” for examiners at the patent office once clearing the backlog became a serious focus.

However, as seen in Chart 3 below, F&B applications have generally taken longer to prosecute than average. 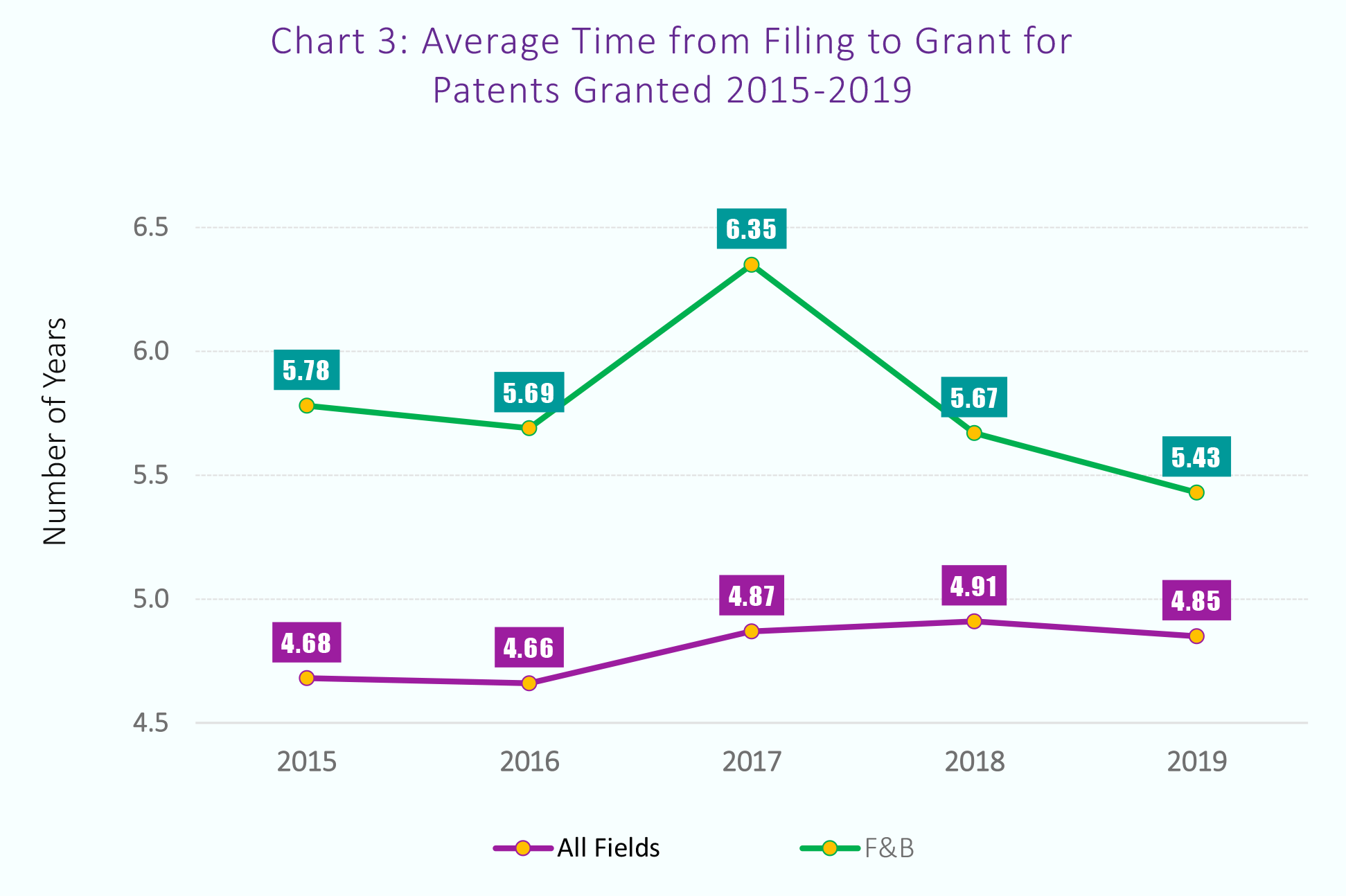 We believe the explanation for this is that Vietnamese examiners often refer to corresponding foreign patents for their examination; however, in the F&B sector, the proportion of domestic applications is relatively large (see Chart 4 below) and there are fewer sources of foreign patents for reference; the progress of patent granting is, therefore, delayed.

The good news is that prosecution times in F&B have been notably declining, while the overall average time has remained largely unchanged. 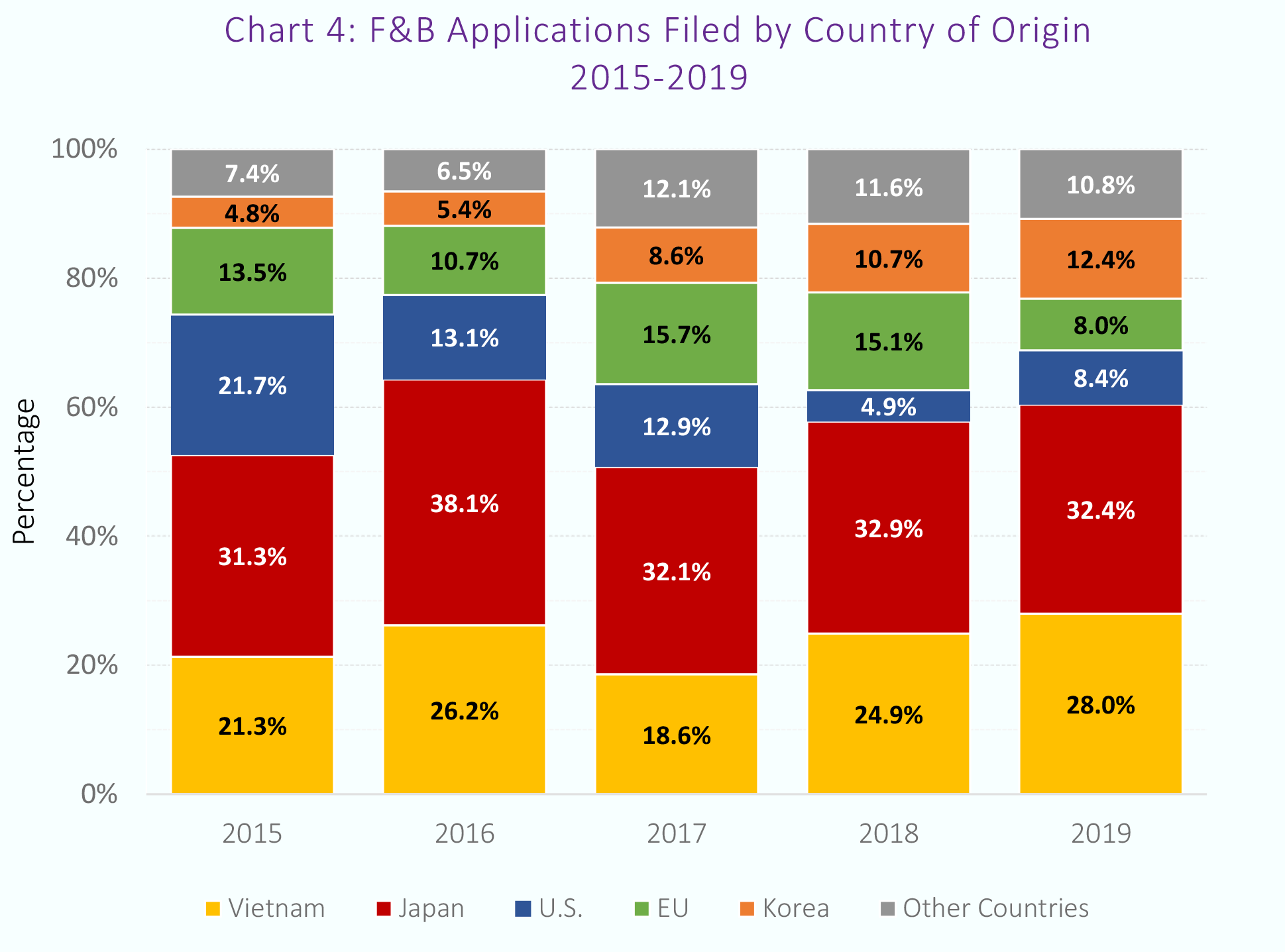 F&B is a different story. While Japan accounts for the largest proportion, domestic Vietnamese applications make up a rather large and growing proportion, ranking second overall and challenging Japan for the lead in recent years. 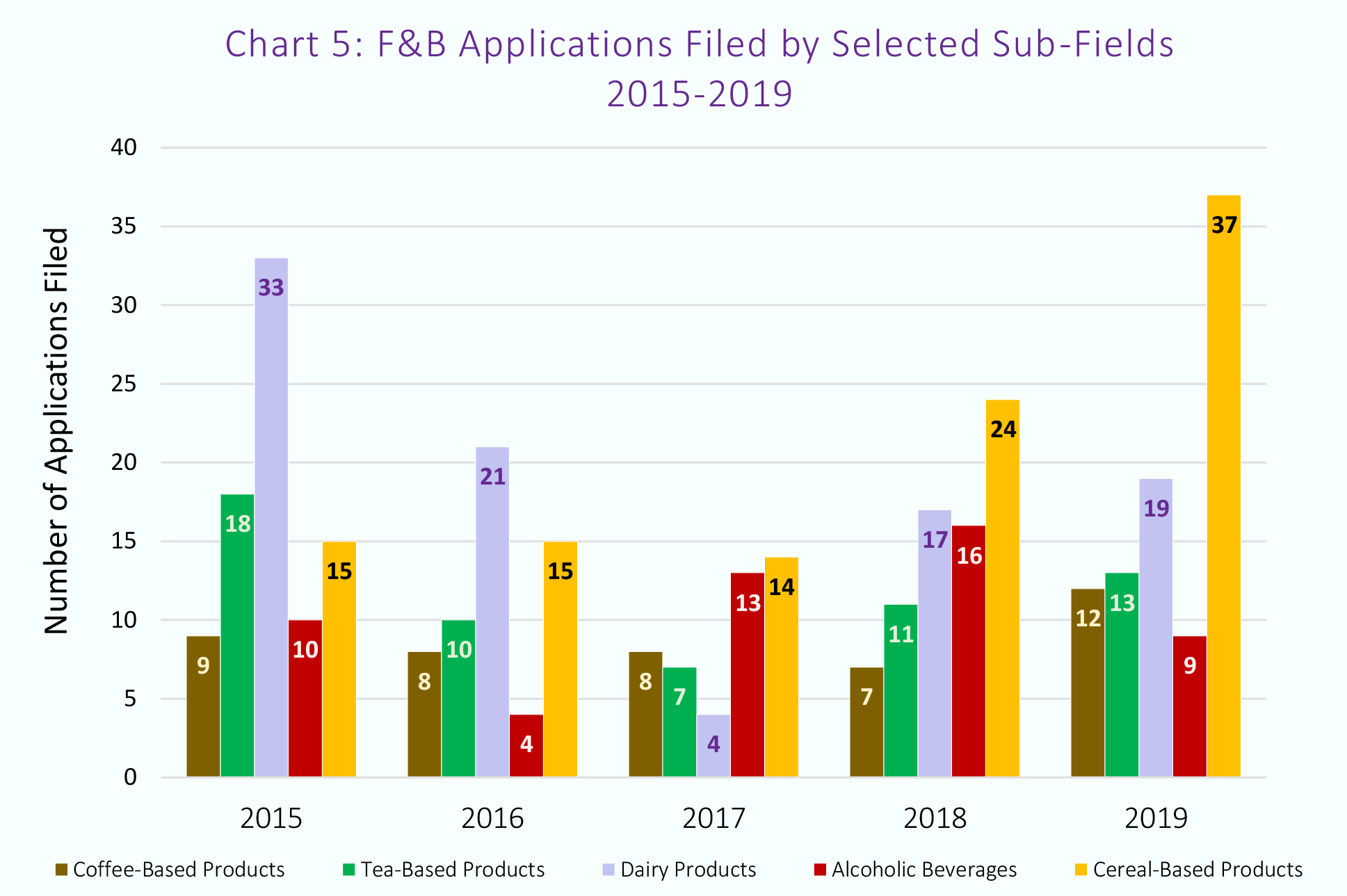 An interesting trend in the chart above is that applications for cereal-based products have shown strong growth recently, and now account for the largest number of F&B patent applications. This reflects Vietnam’s role as a giant in the field of cereal—it is one of the world’s three largest rice exporters—but it remains to be seen whether this is a sustainable trend and this product group will continue to develop in terms of patents in coming years.

Vietnam is a country with a rich agricultural tradition, and is highly qualified to provide raw materials for production and processing of food and beverages. In recent years, mergers and acquisitions in the F&B sector have been very active. Foreign companies with financial and technological advantages, especially big names in the FMCG industry from Thailand and South Korea, have continued to invest in Vietnam. The recent effectiveness of the EU-Vietnam Free Trade Agreement (EVFTA) will likely lead to more investment by European F&B businesses in this sector in Vietnam. As a result, F&B inventions may soon show a significant increase.