Lao P.D.R. has long been a high-potential destination for foreign investors due to its abundant natural resources and strategic location. As the number of legal entities increased, the number of labor disputes have also rose accordingly. In the past, companies sometimes faced issues over the uncertain legal framework for resolving labor disputes.

In February 2018, to further strengthen the legal framework for employment in Laos, the Lao government issued the Decree on Labor Dispute Resolution No. 76/GOL (the “Decree”), which serves as the implementing regulation for labor dispute resolution mechanisms that were previously mentioned in the Law on Labor No.43/NA dated December 24, 2013 (the “Labor Law”). The Decree will help locally established companies to anticipate and plan for labor issues, and exercise better control during labor disputes.

The Decree sets a clear regulatory framework for two types of labor disputes:

Under the Decree, the four main domestic approaches for employers and employees seeking to resolve labor disputes are compromise, administrative remedy, resolution by the Committee for Labor Dispute Resolution, or decision by the Lao People’s Court. Dispute resolution of an international nature is also covered by the Decree and can be addressed by way of relevant agencies or international protocols ratified by Laos. Generally, each approach takes into consideration both individual and collective disputes, the latter being characterized by claims pertaining to the rights or benefits of more than half of the employees in a labor unit or a business group (a new term defined under the Decree as a collection of labor units).

An employer and individual employee or group of employees may wish to resolve a labor dispute through consultation to reach a compromise. To initiate the consultation, a proposal regarding the dispute must be submitted by one party to the counterparty. Each party may appoint a representative to lead the discussions or propose a third party to act as a mediator.

A successful consultation will include in writing the results of the discussions, including how the dispute in question will be resolved, and the signatures of all parties involved. The Decree stipulates that a compromise to resolve a dispute between an employer and an individual employee should be reached within 15 days from the date on which one party receives a proposal from the counterparty.

A collective labor agreement will seal the collective bargaining. To be enforceable, the agreement must be signed by all parties involved, registered with the Lao Labor Administration Authority for examination, and registered with notary authorities to ensure full enforcement. According to the Decree, a compromise to resolve a dispute between an employer and a labor unit should be reached within 30 days from the date on which one party receives the counterparty’s proposal.

In the event that the parties cannot reach a satisfactory compromise, they are free to use another labor dispute resolution approach.

Administrative remedies provide recourse to parties in many types of legal areas, including labor, intellectual property, banking and finance, insurance, and more. However, this type of remedy often lacks a detailed process to follow, with procedures shaped through practice with authorities rather than actual rules or regulations. The Decree therefore endeavors to provide a detailed framework for the use of administrative remedies in labor disputes.

The process for obtaining an administrative remedy is initiated when a complaint is filed with the relevant Labor Administration Authority, whether at the village, district, provincial, or ministry levels. Depending on the type of employee or number of employees involved, a labor dispute may originate at one level and be escalated to higher levels.

At each level, a mediator will be appointed by the relevant Labor Administration Authority to find a satisfactory solution within 15 days from the date of receipt of the written claims of both parties by authorities.

The four administration levels in which an administrative remedy can be filed are outlined in the table below. 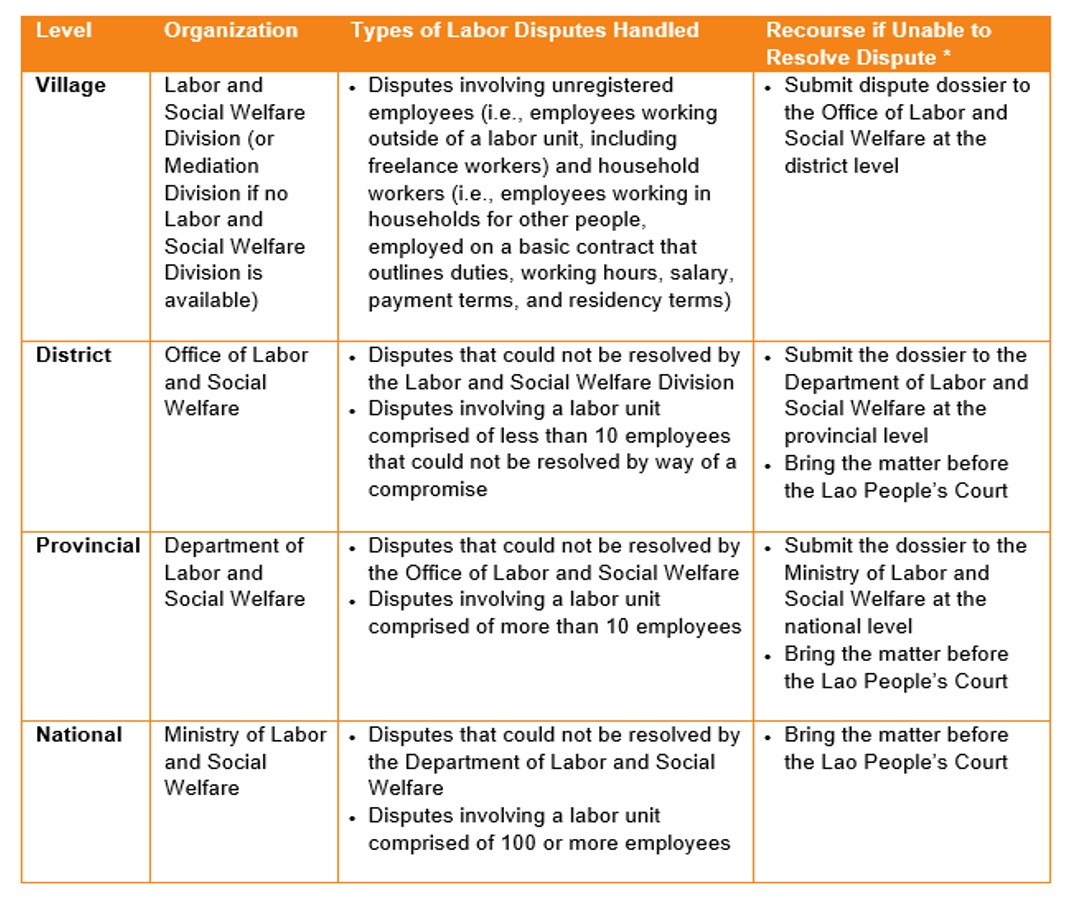 *At the district, provincial, and national level, this recourse is also available if one of the parties does not appear at the request of the responsible official on two occasions, without providing a valid reason.

Resolution by the Committee for Labor Dispute Resolution

The CLDR will be tasked with reviewing labor dispute claims, requesting necessary information or seeking participation from relevant parties, arriving at a resolution, and notifying representatives in the tripartite organization. A dispute that cannot be resolved by the provincial committee may be escalated to the central committee or brought before the Lao People’s Court at the request of one of the parties involved. It is also noteworthy that the CLDR is the one body responsible for handling issues that cannot be resolved by way of compromise during collective labor dispute.

Decision by the Lao People’s Court

Working during a Pending Labor Dispute

The Decree dedicates a section to ongoing fulfilment of an employment contract during a pending dispute, stipulating that employees should continue working during an ongoing individual or collective dispute, unless the CLDR explicitly orders the employees to cease work during the pending dispute. An exception is if the employees notice that work safety conditions have not been met and have notified their employer about the issue previously. In such case, the employees may decide not to work and must report the issue to the Labor Administration Authority immediately.

However, if the employer notices that an employee or employees have behavior that may cause damage to the company’s business, the employer may decide to restrict or prohibit access to those specific employees after consulting with the employee representative or labor union. The employer must also immediately report the issue to the Labor Administration Authority.

The new Decree for resolving labor disputes in Laos provides a promising legal framework to address contentious employment issues for investors seeking to do business in the country.