The EVFTA was signed in Hanoi Sunday after nine years of negotiations, opening a new chapter in EU-Vietnam investment and trade ties. 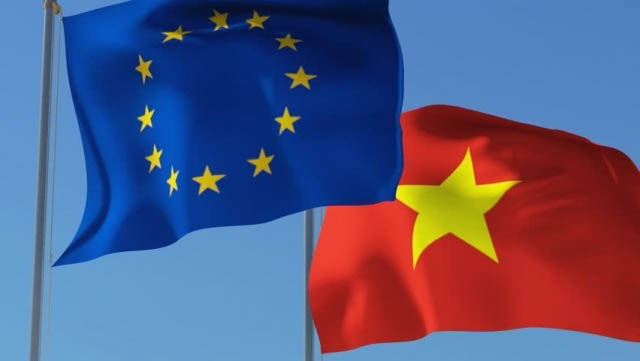 "The agreement opens a new development horizon for both sides. It is a recognition that Vietnam is a country full of potential and the bloc's leading partner in Southeast Asia," PM Phuc said at the event.

In mid last year, Vietnam and the EU agreed to split the original text of the EVFTA into two parts, an FTA which includes the main provisions, and a separate Investment Protection Agreement (IPA).

Cecilia Malmstrom said that the EVFTA will eliminate over 99 percent of tariff lines for Vietnam's exports to the EU and the remaining 1 percent to enjoy zero tariffs within the quotas set for them.

"This agreement sends a powerful signal to the world in times when protectionism is increasing in many places."

Malmstrom also lauded Vietnam's opening of its public procurement market, so that Vietnamese projects can now get access to high quality investment and technology at competitive prices.

"EU is one of the biggest investors in the world, but investment into Vietnam is still modest. With more comprehensive investment protection for investors on both sides, EU investments into Vietnam will grow significantlly," she added.

According to Minister of Industry and Trade Tran Tuan Anh, the signing of the EVFTA and IPA are "the first steps and the two sides will still have to do lots of work to get the deals ratified and enforced."

Nicolas Audier, chairman of EuroCham, said the fact that the EVFTA is the second agreement signed between the EU and a member of ASEAN is testament to Vietnam’s growing leadership not just in the region but also on the world stage.

"The final hurdle will be a crucial vote in the European Parliament. So it is now more important than ever that we redouble our efforts to highlight the clear benefits of this agreement to ensure that it is ratified and implemented as soon as possible," he said in a press release. 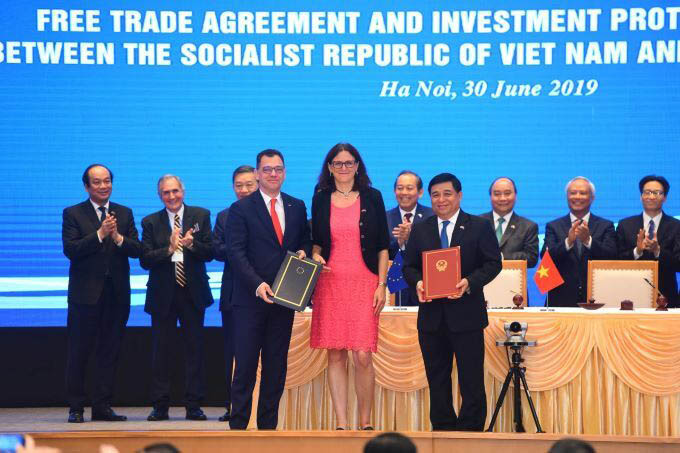 The EU, specifically, will eliminate 99.7 percent of tariff lines for Vietnam's exports in seven years after the deal comes into force. Up to 70.3 percent of Vietnamese products exported to the EU will be free of tariffs immediately, Minister Tran Tuan Anh told correspondents on Tuesday. Only 42 percent now enjoys zero tariffs.

In response, Vietnam will eliminate tariffs on 64.5 percent of imports from the EU, rising to 97.1 percent in seven years. "This is the highest commitment an FTA partner has ever given us. Vietnam will be able to increase its exports of textiles, footwear, agriculture produce, and seafood."

The EVFTA will also reduce various non-tariff barriers, allow Vietnamese companies to compete for government contracts within the EU (and vice-versa), and open up local manufacturing sectors such as food, tyres, and construction materials.

The IPA includes modern rules on investment protection enforceable through the new Investment Court System and ensures that the right of the governments on both sides to regulate in the interest of their citizens is preserved. It will replace the bilateral investment agreements that 21 EU members states currently have in place with Vietnam, putting in place new legal guarantees preventing conflict of interest and increasing transparency.

Nguyen Chi Dung, Minister of Planning and Investment, said that the Vietnamese government has directed agencies to review and amend laws such as the Investment Law and the Law on Enterprises, and compile the Public-Private Partnership Law to better implement the EVFTA and IPA.

"The IPA is a step forward in Vietnam’s orientation to move from quantity to quality of foreign direct investment. It will help us procure more advanced, high tech and sustainable investment, especially projects with high added value," Dung said.

Dr. Oliver Massmann, managing partner of Duane Morris Vietnam law firm, told VnExpress International that Vietnam will benefit more from the EVFTA compared with other FTAs it has signed since Vietnam and the EU are two supporting and complementary markets.

"Vietnam exports goods that the EU cannot or does not produce itself, for instance fishery products and tropical fruits, while the products imported from the EU are also those Vietnam cannot produce domestically."

"Vietnam has one of the highest ratios of public investment-to-GDP in the world (39 percent annually from 1995). However, until now, Vietnam has not agreed to its government procurement being covered by the Government Procurement Agreement (GPA) of the WTO. Now, for the first time, Vietnam has undertaken to do so in the EVFTA," he added.

President of the European Commission Jean-Claude Juncker earlier had said that after Singapore, the agreements with Vietnam are the second to have been concluded between the EU and a Southeast Asian country, and represent stepping stones to a greater engagement between Europe and the region.

"It is also a political statement by two partners and friends standing together for open, fair and rules-based trade."

The deal is expected to submitted to the European Parliament for consent later this year. It is likely to be ratified by the National Assembly of Vietnam by the end of this year or early next year, Minister Tuan Anh said early this week.

The EU is Vietnam’s second-largest export market after the U.S., with key exports including clothing and food products.