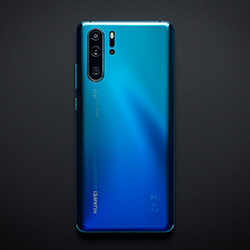 Marketing the Huawei P10’s successor as the P11 seemed like the most logical step when it came to the phone’s release in early 2018. But in a bid to avoid clunky names such as P14 and P17 in the future, Huawei skipped these numbers and went straight to P20
The brand’s latest flagship smartphones are marketed as part of the P30 series which essentially means that its current branding strategy could potentially continue for another six years. The company’s plans beyond that, however, are far from confirmed. But recent trademark applications do hint at what could happen.
Allowing it to build upon the P series’ brand value beyond 2025 if it wishes to, Huawei recently applied to register the ‘P300,’ ‘P400,’ ‘P500,’ ‘P600,’ ‘P700,’ ‘P800,’ ‘P900,’ and ‘P1000’ names across both the European Union and in the UK. The move suggests Huawei’s eventual P90 series will be succeeded by the P100 lineup. Similarly, P900-branded devices could be followed up by P1000 offerings. While not yet trademarked, a comparable strategy could also be applied to Huawei’s successful Mate series. Therefore, future models could land as the Mate 100 or Mate 1000.
Despite this latest move, there’s no guarantee Huawei’s future devices will adopt the registered branding. The company could either scrap its P series in the coming years or switch things up with a different strategy that makes use of letters, for example.
Source: Phonearena