Vietnam's Covid-19 record could make it an attractive investment destination as economies seek to make their supply chains less dependent on China.

Despite a population of over 96 million and sharing a land border with China, Vietnam has recorded only 288 Covid-19 cases so far and zero deaths. Meanwhile, China, where the disease was first reported last year, has recorded nearly 83,000 cases and more than 4,600 deaths.

Vietnam's highly effective containment of the Covid-19 pandemic will prove to be an advantage for the country's investment environment, helping economic recovery and placing the country in a new position on the global stage, Planning and Investment Minister Nguyen Chi Dung said at an online meeting between Prime Minister Nguyen Xuan Phuc and businesses Saturday.

Foreign investors are considering shifting investments to Vietnam due to their trust in Vietnam's "safety" amid the pandemic, according to recent reports by the National Assembly's Economic Committee. Evidently, U.S. and South Korean tech firms have recently been pushing to diversify their production out of China, and some have chosen Vietnam, the reports said.

Apple Inc., for example, has planned to produce 3-4 million wireless earphones called AirPods, or around 30 percent of total classic AirPods production, in Vietnam this quarter, a Nikkei Asian Review report said. This would be the first time that millions of AirPod units will be produced in Vietnam, it added.

Samsung has also been considering shifting some of its high-end smartphone production lines to Vietnam, Reuters reported in March, citing a company spokeswoman. 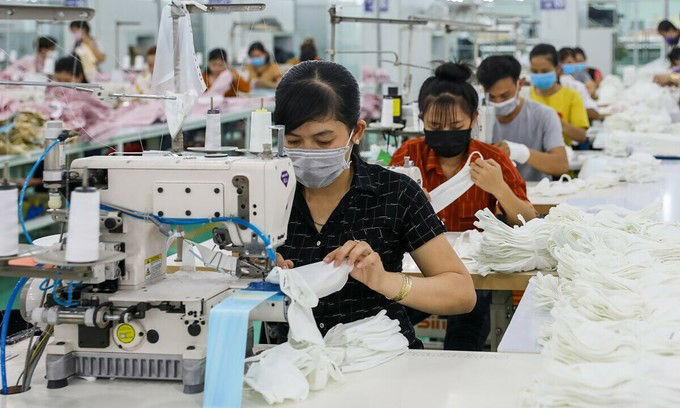 He noted that other countries that are main competitors for Vietnam in seafood production, like India and Ecuador, are now having to impose quarantine and lockdown measures to curb the disease, which would cut their production and exports by around 50 percent.

The same goes for countries like Indonesia or Thailand, where production and exports could be cut by around 30 percent, he added.

"When main competitors suffer delays in their production recovery following the pandemic compared to Vietnam, it presents a huge opportunity," Hoe said.

For the textile industry, too, demand is expected to increase gradually after the crisis passes, said Le Tien Truong, director of the Vietnam National Textile and Garment Group (Vinatex). As such, production businesses, including those in the textile industry, must get ready to re-orient themselves and seize opportunities presented, he said.

Tran Ba Duong, board chairman of automobile firm Truong Hai Auto Corporation (Thaco), cautioned businesses that they should not rely too much on governmental solutions.

The government's foremost priority in a pandemic is to support the poor and vulnerable, including small and medium businesses, he added.

"Support from the government should help businesses stand on their own feet, not make them over-reliant on such support.

"Right now, solutions to help recover the economy should strike a balance between solving short-term challenges and maintaining market economy principles," he added.

Duong also called for a concerted, relentless effort for economic recovery after the pandemic crisis passes, saying this should be coordinated and supported by all industries and sectors, just like the unity shown in the ongoing fight against Covid-19.

PM Phuc said the pandemic could provide development opportunities for Vietnam if there was good business coordination and management, adding that businesses should actively restructure themselves, increase managerial capabilities and production.

"Businesses need to maintain their workforce and their domestic and international markets," he said.

The government will also create a good environment to help businesses in various aspects, through finance, market-oriented, fiscal and other policies, he added.