With many AirPods Pro cases saying ‘Assembled in Vietnam,' it appears that Apple has shifted part of its production from China to Vietnam.

Many users have shared pictures on social media of the gadget with the new label instead of the ‘Assembled in China’ label it used to have.

Vietnam only used to assemble AirPods and Lightning cables, while the AirPod Pro was exclusively made in China.

The Nikkei Asian Review had previously reported that AirPods have been mass produced in Vietnam since early March, quoting a person familiar with the matter saying: "the Vietnamese officials even granted special permits for a key Apple AirPods assembler to help the company bring in engineers to the country for smooth production during lockdowns." 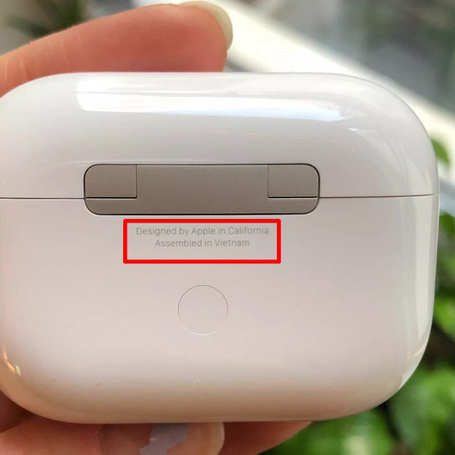 However, this factory did not assemble the high-end AirPods Pro.

On social media and online forums, the AirPods Pros made in Vietnam have received positive reviews.

A person with the account name MrGimper wrote in the MacRumors forum: "I am quite surprised that Apple is manufacturing AirPods Pro in Vietnam. I am using the second-generation of

AirPods assembled in Vietnam and am very pleased with the quality of the product. I hope it will be the same for the AirPods Pro."

Cole Slaw said: "Apple is diversifying its supply chain and that's good for the world. I hope other U.S. companies will follow suit to reduce their dependence on China."

The ‘Technology lovers’ section on China’s Weibo said: "This is the first time a new Apple device has been made outside of China. Many other Apple manufacturing partners are also planning to move out of China. Vietnam is an attractive destination because of cheap labor and good infrastructure."

This is not the first time Apple is diversifying its manufacturing base. In 2017 it assembled some iPhone models in India.

In June last year the Nikkei Asian Review reported that Apple had asked its suppliers to look for ways to shift "15 percent to 30 percent of production from China to other parts of Southeast Asia" amid the trade war between the world's two largest economies.

In the past few months Apple has listed many job vacancies in Vietnam on LinkedIn. This has lent credence to reports that Apple could increase manufacturing in Vietnam.